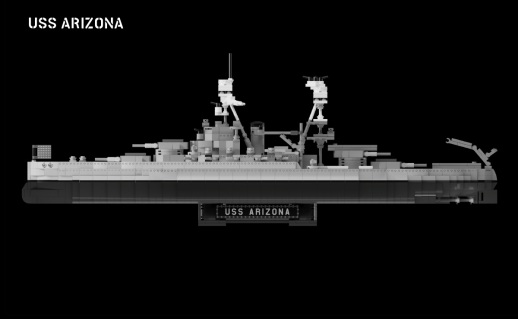 Lined with twelve 14-inch guns mounted in four super-firing triple turrets—two forward, and two aft—the USS Arizona was a striking figure of naval superiority. The Arizona was the second—and final—of the Pennsylvania super dreadnoughts built at the end of the Great War. She was a 31,400 ton vessel that was built at the New York Navy Yard in Brooklyn. Her crew consisted of 1,639 enlisted seamen as well as 92 officers and warrants. Her first years of service were spent cruising the Atlantic and Mediterranean, reaching as far as Turkey. During the 1920s, the Arizona shifted to Southern California, patrolling the West Coast, and making occasional visits to Hawaiʻi for fleet exercises.

From 1929 to 1931, the Arizona shifted back to the Norfolk Navy Yard in Portsmouth, Virginia, for modernization. All of her major components were upgraded to better suit a “modern” war. These included: cage masts replaced by tripod masts, torpedo bulges along the hull, horizontal armor for better protection from air attacks, new boilers and turbines, upgraded guns, and added anti-aircraft armament. American military strategists highlighted aircraft to be an essential aspect of future naval conflicts, and the Arizona’s upgrades reflected that deduction. Upon completion of the upgrades in March of 1931, the Arizona took President Hoover on a vacation cruise around the Caribbean.

As the 1930s drew to a close, war was on the horizon. Germany had sent its blitzkrieg across Europe, while the Japanese were leap frogging across Asia and the Pacific to expand their empire. As Japan’s aggressions increased, relations with the United States waned. To help fend off the Japanese threat, the Arizona was sent to Pearl Harbor, Hawaiʻi. Her presence was essential to the defense of the United States and its territories in the Pacific.

On October 22, 1941, during routine exercises, the Arizona was struck port side by the USS Oklahoma. The collision created a four-foot-wide by twelve-foot-long V-shaped hole along the torpedo bulge. The Arizona was sent to dry dock at Pearl Harbor for repairs. Her last training exercise occurred on the night of December 4—a night-firing practice with the Nevada and Oklahoma. All three were moored along Ford Island the following day.

December 7, 1941, the Arizona’s color detail was on deck waiting for 8:00 am to raise the stern colors. The harbor was quiet at that hour, many still recovering from the activities of the night before. The wars raging in Europe and Asia did not yet feel real. They seemed as distant at Pearl Harbor as they were stateside. For many uniformed soldiers, Hawaiʻi was paradise, a conclave of beaches and beautiful waters that suggested anything but war. As 8:00 am approached, so did the low-toned droning sound of aircraft. The war had arrived.

Nearly one-hundred Japanese carrier based B5N2 “Kate” bombers hummed through the skies over Hawaiʻi towards Pearl Harbor. Forty of the Kates were outfitted with torpedoes—their sights set on battleship row. The California, Oklahoma, West Virginia, and Nevada were sunk almost immediately. The other sixty Kates, outfitted with bombs, looked for opportunistic targets. The Arizona fell victim early on to an 800-kilogram bomb. At roughly 8:10 am, the bomb struck forward of turret two along the starboard side. The bomb sunk into the turret’s powder magazine. Seconds later, the Arizona erupted. The foremast and forward superstructure imploded inward toward the void left by the explosion. Turrets one and two sank into the hull, twenty feet lower than their respective positions. In total, 1,177 sailors were entombed in the Arizona, their final resting place.

Battleships, long considered the flagship of a nation’s navy, were now defenseless against aerial attack. Pearl Harbor set the course for future naval conflict. Fortunately for the United States, aircraft carriers Enterprise, Lexington, and Saratoga, were all on exercises and not present during the attack. Japan’s inability to cripple the United States’ fleet carriers gave the U.S. a tactical advantage. No longer would naval conflicts be won by battleships trading blows.

The USS Arizona today is a memorial that has become a popular tourist attraction. However, the Arizona serves as more than that; it is a reminder of the sacrifice, of the loss, and of overwhelming grief that comes with war. Like the aftermath of 9/11, Pearl Harbor and the USS Arizona rallied the people of the United States, to set aside their differences and to unite to fight against a global terror. 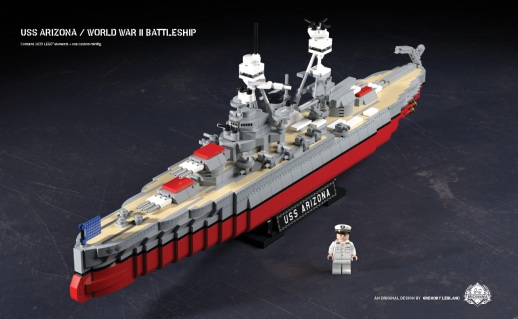