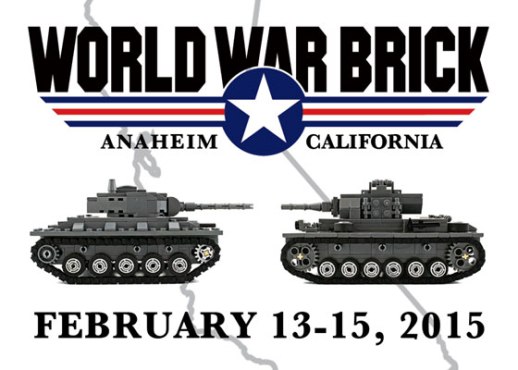 Join us February 13-15, 2015 for World War Brick Anaheim for the first-ever specifically historic military LEGO® modeling event on the West Coast. Sponsors for World War Brick Anaheim include Brickmania, BrickArms, GI Brick, Brickstuff, Citizen Brick,  Brick Brigade Toy Labs and more. There will be displays created by LEGO® enthusiasts from across the country, fun and games, friendly competitions and more. Our gathering is meant to share our enthusiasm for historic modeling, building with LEGO® bricks, and to raise awareness and money for Veterans.

World War Brick Anaheim will take place at the Embassy Suites Anaheim South (11767 Harbor Boulevard, Garden Grove,California, 92840). We have secured the 10,000 SF main ballroom and will have plenty of space for displays, workshops, activities, games and the WWB store. The hotel is a 17 minute drive from the Orange County Airport and 45 minutes from LAX. We have chosen Anaheim for its central location for all of our Souther California friends and of course it’s easy proximity to the Disney Resorts and other local attractions.

Weekend Pass is Your All-Access Ticket

Weekend Pass holders will be eligible for all three days of activities and will receive a goodie bag that includes a T-shirt, event kit, and special gifts from the event sponsors. They will also be first to see and purchase new products from the event sponsors, participate in various building challenges, attend the charity Auction (proceeds to the Wounded Warrior Project) and interact with the creators of the most cutting edge custom LEGO® and after-market products. Weekend Pass holders are also invited to bring their MOCs (My Own Creations) to share with the general public and be eligible for one of the prestigious WWB MOC Award Trophies. Weekend Pass advanced registration ends January 31. PURCHASE HERE

The merely curious are invited to attend during the Public Exhibition taking place Saturday and Sunday. During this time you will be able to see hundreds of unique historic military models, shop exclusive items from our sponsors, watch exciting tournament action, meet the craftspeople behind the exhibits, and join games and activities that benefit the Wounded Warrior Project. The public exhibit hours are 10am to 4pm Saturday and Sunday only. Visitors who pre-pay online will be admitted entrance starting at 9:30 and will receive a free ticket good for one activity or the raffle. Advance ticket sales end February 11th. PURCHASE HERE

World War Brick was founded by Daniel Siskind, an award-winning maker of historical models and displays built from LEGO® Bricks. Founded in 1999 under the name Brickmania, Daniel and his team produce the finest quality historical displays featured in museums, memorials, reunions, and schools, and whose custom kits are enjoyed in homes around the world.

Brickmania will have several major works viewable at World War Brick like a model of the World War II destroyer USS Nicholas that measures 11 feet in length. Other displays include a Battle of the Bulge diorama, a Vietnam War montage, a homage to the Battle of Mogadishu (made famous in the book and movie “Black Hawk Down”) and more.

There will be many other creations and models on display created by World War Brick attendees, mainly in historical themes, but also a smattering of science fiction and other subjects.

We’re Building to the Next Level

The official LEGO® product line does not include modern military themes. To help fill this gap, BrickArms founder Will Chapman began manufacturing his own injection-molded plastic weapons designed specifically for use with the LEGO system. Since it’s humble beginning in a garage in a suburban Seattle in 2006, BrickArms has gained a huge international following and a reputation one of the finest-quality American toy manufacturers. BrickArms has been a major sponsor of the World War Brick event since day one. Will Chapman is giving the featured presentation on Friday evening to Weekend Pass holders.

World War Brick has been dedicated to supporting our Veterans since the first one was held in Chicago in 2012. Many activities such as the raffle and auction are specifically designed with fund-raising in mind, with all proceeds being donated to the Wounded Warrior Project. At World War Brick 2014 we raised $5487 and plan to far exceed that figure in 2015.

Brickmania will be taking several of our large displays on a mini tour around the country in February 2015. These include the 11 foot long World War II destroyer USS Nicholas, plus several World War II and other historic military dioramas. We will also have many of our kits, BrickArms weapons and other products available for the historic LEGO building enthusiast. Please note that our schedule permits us only one date in most locations. Click HEREfor photos of our previous WW2 in LEGO exhibit from 2014.