The 1st Infantry Division is a mechanized infantry division of the United States Army, and is the oldest continuously serving in the Regular Army.  It has seen continuous service since its organization in 1917 during World War I, though our minifig is based on the WWII 1st Division Uniform.  It was officially nicknamed “The Big Red One” after its shoulder patch and is also nicknamed “The Fighting First”.  However, the division has also received troop monikers of “The Big Dead One” and “The Bloody First” as puns on the respective officially-sanctioned nicknames.  It is currently based at Fort Riley, Kansas.

Shortly after the beginning of World War II in Europe, the 1st Division was moved to Fort Benning, Georgia, on 19 November 1939 where it supported the Infantry School as part of American mobilization preparations. It would spend the next two years moving locations approximately every 6 months, before returning to Fort Devens on 6 December 1941.  A day later, on 7 December 1941, the Japanese attacked Pearl Harbor and then the United States declared war. The division was ordered to Camp Blanding, Florida, as quickly as trains could be gathered and winter weather permitted, and arrived on 21 February 1942. The division was there reorganized and refurbished with new equipment, being re-designated as the 1st Infantry Division on 15 May 1942. The division departed New York Port of Embarkation on 1 August 1942, arrived in Beaminster in south-west England about a week later, and departed 22 October 1942 for the combat amphibious assault of North Africa.

After a mostly successful campaign in North Africa, during which the Allied forces secured Tunisia,  the first division moved North, across the Mediterranean.  General Patton specifically requested the division as part of his invasion forces for Sicily.  The Sicilian campaign saw heavy action throughout.  1st division took part in the Battle of Gela, an amphibious assault, as well as the Battle of Troina.  The assault of this mountain town cost the lives of over half the division.

Once they had secured Sicily, the 1st division returned to England to prepare for the Normandy Invasion.  The 1st were among the initial wave of troops that assaulted Omaha Beach on D-Day.  Some of the divisions units suffered 30% casualties within the first hour of the assault, but managed to secure Formigny and Caumont by day’s end.  The 1st division pushed across France in a continuous offensive, reaching Aachen in September, 3 months after D-Day.  The division laid seige to the German occupied border town, eventually taking the city after a direct assault on October 21st, 1944.  The 1st pushed through the Hurtgen Forest, driving to the Rur River. 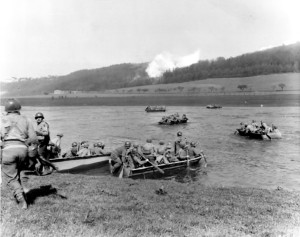 Having engaged in 6 months of combat without R&R, the 1st was moved to rear area 7.  After less than 2 weeks, the Germans launched the Wacht Am Rhein offensive (also known as the Battle of the Bulge), forcing the division back into action on the Ardennes front.  After over a month of continuous fighting, the German offensive started retreating.  The 1st division continued pushing their line up until the day the war ended.

Sixteen members of the division were awarded the Medal of Honor. The division lost 3,616 killed in action, 15,208 wounded in action, and 664 died of wounds.  Their memory is honored at the First Division Museum at Cantigny Park in Cantigny, Illinois.