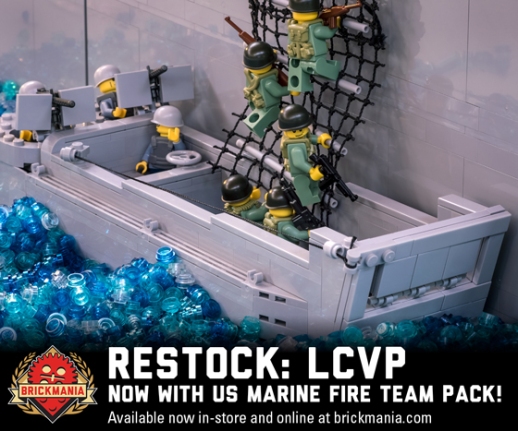 This batch of LCVPs includes an exclusive US Marine WWII Fire Team Pack with five genuine LEGO mini figures with custom printed US Marine figures and fully equipped with BrickArms weapons and accessories. All of these items alone would cost more than $60 if purchased separately

The LCVP is 10% off the MSRP during August for Pacific Month! All WW2 Pacific Campaign kits and mini figures are 10% all month long!

Background on the LCVP:

The LCVP was landing boat designed and manufactured by Higgins Industries and was used extensively by US forces, during the myriad of amphibious landings during World War II. The LCVP was 36 feet in length, had a shallow draft, and had a ramp at the bow ramp that spanned the entire width of the hull. During an amphibious landing, it would be lowered into the sea from a larger ship, where troops would descend into the boat via cargo net lowered down the ship’s side. LCVP could carry a platoon of 36 combat troops or a small vehicle such as a jeep to shore, thus earning the designation Landing Craft Vehicle, Personnel. The LCVP was armed with two .30 caliber Browning machine guns and was manned by a crew of four. The boat was constructed mainly of plywood, with the steel bow ramp serving as the main armor protection against shore fire. Its 225 horsepower diesel engine pushed the LCVP to 12 knots. The boat’s shallow draft meant it could be beached directly on short, the ramp lowered for troops or vehicles to rapidly disgorge. The LCVP would then back away from shore and return to its mother ship for another load. With more than 20,000 LCVP made during the war, it was undoubtedly one of the crucial items that helped deliver the Allied victory in Europe and Asia.

Features of the LCVP kit include: 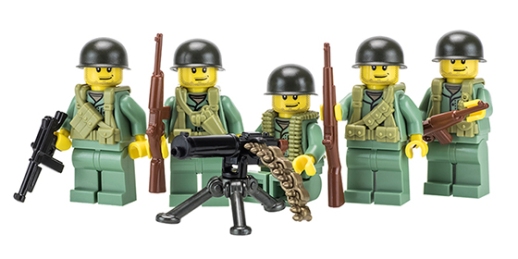 All Brickmania kits are made of new-condition LEGO elements. All kits come disassembled, and include complete full color printed building instructions, and packaged in a sealed box.

This entry was posted by Dan.