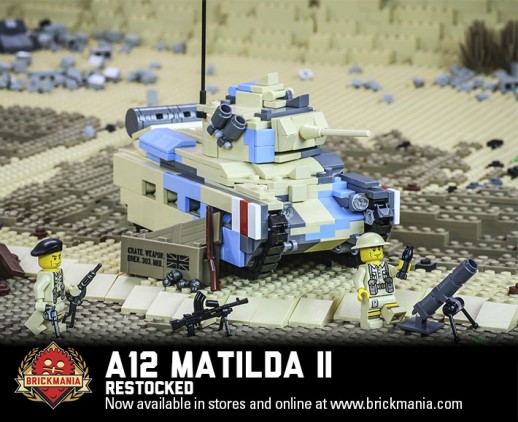 The A12 Infantry Tank Mk II, universally known as the Matilda II, was a British tank used in the Second World War. Its designed intent was to support infantry units during attacks, therefore it was heavily armored at the expense of mobility and firepower. It’s armament consisted of a QF 2 Pounder (40mm) anti-tank gun and a single Besa machine gun mounted coaxially in the turret. The Matilda II is the only British tank to see action during the entire war, but it is most commonly associated with the North Africa campaign. Its unique disruptive camouflage pattern was modeled after the type used on World War I battleships. Its heavy armor outclassed most contemporary early war German tanks and for a time earned it the nickname “Queen of the Desert.” The arrival of increasingly more powerfully armed German tanks caused the Matilda II to be phased out of operations in North Africa by the end of 1942.

Features of this model include:

All Brickmania model kits are made of new-condition elements from LEGO, BrickArms and/or BrickArms. This model comes disassembled, includes printed building instructions, and comes packaged in a sealed box.