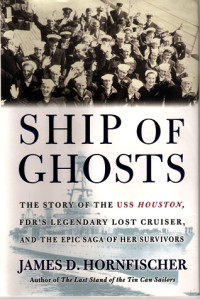 The heavy cruiser USS Houston was the flagship of the US Asiatic Fleet when the Japan declared war on the USA, Great Britain and the Netherlands. As the Allies reeled under the unstoppable Japanese onslaught in the South Pacific, The USS Houston fought several battles as part of hodge-podge international fleet that was slowly being whittled down by Japanese air power. As the USS Houston and Australian Cruiser HMAS Perth attempted to a harrowing nighttime escape from superior Japanese forces in the Dutch East Indies, they stumbled into a massive Japanese invasion flotilla off the island of Java.  The Houston and Perth were greatly outnumbered, but put up a heroic fight and were determined to make their inevitable demise a costly one for the Japanese.  Both Allied cruisers were sunk by the Japanese, but not before inflicting great damage to the invasion fleet.

In Ship of Ghosts, The Story of the USS Houston, FDR’s Legendary Lost Cruiser and the Epic Saga of Her Survivors, James Hornfischer details the history of the USS Houston and its sailors, from launch through those fierce battles in the early days of World War II. The story is hardly over when the ship goes down.The survivors are interned as POW’s by the Japanese, whose Bushido code relegates prisoners to less than human beings. Those who survived the fiery holocaust of battle, must now strive to endure almost four years of living hell. Joined by other Allied POWs, they were  forced to become slave laborers for the Emperor and endure the worst kind of hardships imaginable. Tragically this including being bombed by Allied planes while constructing the Burma Railroad and being torpedoed by US submarines while being transported like cattle in the hulls of unmarked Japanese merchant ships. Hornfischer has the ability to convey history in vivid detail like few others. Some of the things he relates in this book were just so gut-wrneching that I had to set it down and walk away for a while.  Don’t get me wrong, this book is a real page-turner, but the story of the USS Houston survivors has more than it’s fair share  of grim moments.

I’ve now read all three of Hornfischer’s books and am convinced that he is on track to become one the best Naval history writers of modern times. Hopefully there is more to come!

Helmet for my Pillow: From Parris Island to the Pacific by Robert Leckie