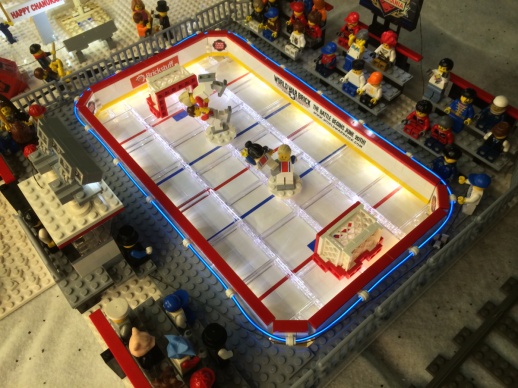 Brickmania is sponsoring several LEGO displays around the Twin Cities throughout the holiday season. This includes a special holiday display at the Brickmania Toyworks during our open house events through December, plus the following additional events and locations:

Landmark Center, Saint Paul, November 30, 4-6pm — the Landmark Center will be officially opening its outdoor skating rink and celebrating inside with their annual Winter Courtyard party. We will have the TCLTC’s LEGO Landmark Center and LEGO holiday village with working lights and a trolley on display. We will also have bricks to play with and gift-sized LEGO and Brickmania sets for sale. Directly following the event will be the official Christmas Tree lighting ceremony, across the street in Rice Park.

Twin Cities Model Railroad Museum, Saint Paul, Saturday Evenings from 6-9pm, November 30-February 28th — “Night Trains Season comes to the dozens of model railroad layouts in a magical way, the lights are turned down, the buildings and street lights glow warmly, setting the scene for specially lighted models of vintage passenger trains.” The TCLTC has built a special layout designed for low-light viewing that will be on display at the TCMRM through February. This is a display not to miss!

Minnesota Transportation Museums / Jackson Street Roundhouse, Saint Paul, December 7-8, 14-15, 21-22 10am – 4pm — “Before Santa skirts the rooftops in his sleigh, he’ll stop by the Jackson Street Roundhouse in his very own full size luxury train! Visit Santa and Mrs. Claus, tell him what you want for Christmas (you don’t have to be a kid to share your secret with Santa!), get your photo with Santa and Mrs. Claus, check out interactive model railroad layouts by the Greater Midwest Lego Train Club and the New Brighton Connection Model RR Club, make some cool kids crafts, enjoy music, entertainment, refreshments, and of course, unlimited train rides.”

Great RiverCenter Train Show, Saint Paul, December 28-29 — “We hereby announce the formulation of Choo Choo Bob’s GREAT RiverCentre Train Show, a two-day train extravaganza at the RiverCentre in St. Paul. This one-of-a-kind train festival is to be held on December 28th and 29th, 2013, and will feature two full days of live performances by Choo Choo Bob and the Holy Smokestacks Revue, tons of incredible layouts from model railroading clubs, a formidable lineup of hobby vendors, free inflatables and ride-on train for the kids, plus all kinds of discounted goodies from Choo Choo Bob’s Train Store. All aboard!

Special Words of Appreciation
Brickmania would like to extend a special thanks to Brickstuff, who have been our gracious co-sponsor and provider of LEGO compatible lighting for all of these events. Brickstuff will have a table at our December 7th and 21st open houses, with all the supplies need to light up your LEGO creations.