The M923 Truck is a 5-ton 6×6 U.S. military heavy truck. Designed in the late 1970s to replace the M39 and M809 series of trucks, it has been in service ever since. The M923 evolved into its own family of cargo trucks, prime movers, and recovery vehicles, with about 32,000 in all produced.  This all purpose truck has been in use since 1982, seeing action across the globe.

The M198 Howitzer is a medium-sized, towed 155mm artillery piece, developed for service with the United States Army and Marine Corps. It was commissioned to be a replacement for the WWII-era M114 155 mm howitzer. It was designed and prototyped at the Rock Island Arsenal in 1969 with firing tests beginning in 1970 and went into full production there in 1978. It entered service in 1979 and since then 1,600 units have been produced and put into operation. 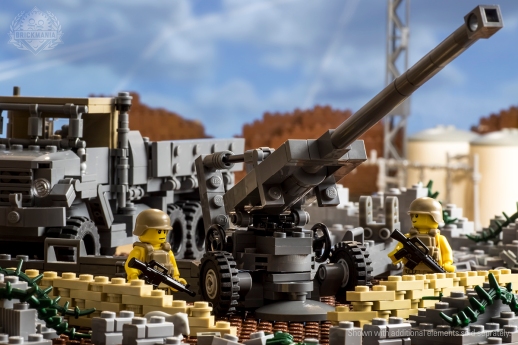 We are pleased to add these awesome Modern Combat kits to the Brickmania lineup.  Remember, the only way to get the Howitzer is to buy the Battle Pack.  The gun is not offered separately.  Get yours before they are all gone.